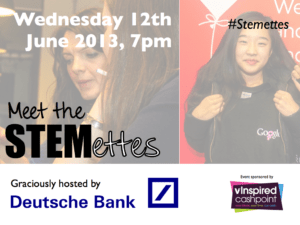 I’d once again like to thank everyone who has got behind the Stemettes effort, from it’s humble beginnings in my new year’s blog post to all of the wonderful stuff detailed below. Thanks to the core Stemette team:

but also thanks to all of you who have spread the word, told friends, wrote blog posts, helped at events, sat on panels and listened to me over a cup of coffee. It’s all much appreciated and every connection has had an impact and will shape the future of the project in more ways than you can tell! I’ll do a bigger thank you note next month.

1 – May the fourth be with you

May has been a laid-back month compared to what June & July are set to be. We were in the Guardian (twice) and on the Women 2.0 blog. We also spoke at OpenTech and Digital Shoreditch.

We’ve been asked to be at a number of places in June and July. Have a look at the dates, and the asks and let us know if you’re free. We can cover (reasonable) travel expenses (no flights, no hotels) so don’t be put off if Stratford or Exeter seem far for you.

Don’t miss out on the June Stemettes panel. And don’t leave your nieces, cousins, sisters, daughters and friends at home either.

Hosted by Inventor extraordinaire Ruth Amos, we’ll be at Deutsche Bank’s HQ in London with CIO of the year 2012, the founder of fashion mobile app SnapFashion, a SoundCloud engineer (live from Berlin), a doctor of Genetics and a Derivatives strategist.

We’ll post more details in a follow-up post, but mark 17th & 18th August as the Stemette Hackathon date in your diaries. We’ll be at the Barbican in London (and a part of the wider month long HackTheBarbican event).

As each day passes, the need for certain skills in the team becomes more and more apparent. With a recent bit of funding news and increase in Stemette requests, I’m looking for the following:

Paperwork Stemette – Head Stemette is famously allergic to paperwork. This role may become a full-time position in due course. At present, you’ll be filling Health & Safety forms, compiling consent forms and filling more forms, as well as keeping copies of forms, co-ordinating our calendar and fielding requests that drop in the Stemettes inbox each day.

Funding Stemette – At initiation, the project had no funding. We’ve now got some and are being asked to do more and more. Given everything is voluntary, it would be nice to have someone worry about how we’re going to pay for Big Stemette travel expenses, food at hackathons and hired equipment at hackathons. It would also be lovely to pay Paperwork Stemette to take on a bigger role.