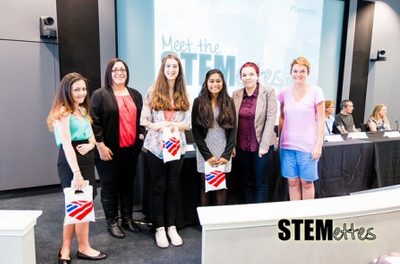 We found a taxi, jumped in and headed for our venue – the Bank of America Merrill Lynch mbna offices in Chester Business Park. The taxi pulled up outside one of the more impressive, fancy, Buckingham Palace-like venues we’ve ever been to and we were at our destination.

Some minutes later, a modest audience of teenage girls accompanied by parents, guardians and teachers were joined in the main auditorium by our seven panellists:

We kicked off the panel by hearing from each of them – what they do, why they enjoy it and how they got there – all in 3 minutes or under. Host, Head Stemette then asked each of them a more personal question: either about summer memories or more theoretical ones like ‘Would you rather build yourself a rocket and visit space, or engineer a submarine and travel underwater?’ and even ‘what’s your favourite cheese?’. All were answered honestly and truthfully. The audience then posed their own questions: ‘What does a typical day look like?’, ‘what is your favourite type of dog?’, ‘what do you wish your younger self knew?’.
The question and answer session drew to a close and it was time to grab some cupcakes, drinks, fruit or biscuits and then head out to the atrium for the networking session. In groups of 4 the girls rotated around the panellists – spending 5 minutes with each to share a bit about themselves, their journeys so far and seek advice on careers and the future. All the while they filled out activity sheets on the panellists and new information they were garnering from them.

When the time came, we collected up the activity sheets, marked them and collated the winning entries. With everyone fully hydrated we moved back into the main auditorium. The winners were announced – each receiving a small prize – and thank yous were said to the insightful panellists, event volunteers and organising team.

Attendees had a great time, loved the venue and got some memorable, long lasting advice which will remain with them as they transition into Big Stemettes. 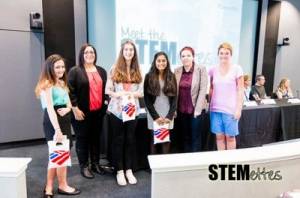 We’d like to thank Bank of America Merrill Lynch and our panellists for making this event a success – and for spending the afternoon with us, rather than at the Chester races. Photos are up on our Flickr and Facebook accounts. The video will be up on our YouTube channel shortly.

Our next panel event will be later this year – keep an eye on our website for date & registration details.