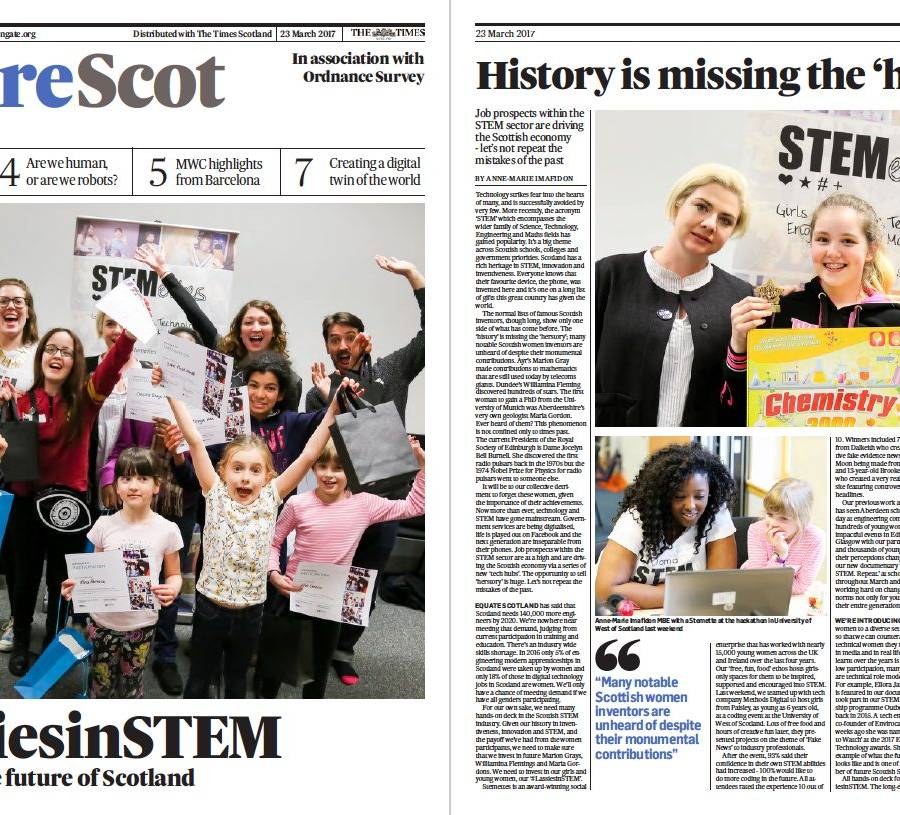 History Is Missing ‘Herstory’; Why The Future Is #LassiesinSTEM

This originally appeared in the FutureScot supplement of the Times on March 23rd.

Technology strikes fear into the hearts of many, and is successfully avoided by very few. More recently, the acronym ‘STEM’, which encompasses the wider family of Science, Technology, Engineering and Maths fields, has gained popularity. It’s a big theme across Scottish schools, colleges and government priorities. Scotland has a rich heritage in STEM, innovation and inventiveness. Everyone knows that their favourite device, the phone, was invented here and it’s one on a long list of gifts this great country has given the world.

The normal lists of famous Scottish inventors, though long, shows only one side of what has come before. The ‘history’ is missing the ‘herstory’; many notable Scottish women inventors are unheard of despite their monumental contributions. Ayr’s Marion Gray made contributions to mathematics that are still used today by telecoms giants. Dundee’s Williamina Fleming discovered hundreds of stars. The first woman to gain a PhD from the University of Munich was Aberdeenshire’s very own geologist Maria Gordon. Ever heard of them? This phenomenon is not confined only to times past. The current President of the Royal Society of Edinburgh is Dame Jocelyn Bell Burnell. She discovered the first radio pulsars back in the 1970s but the 1974 Nobel Prize for Physics for radio pulsars went to someone else.

It will be to our collective detriment to forget these women, given the importance of their achievements. Now more than ever, technology and STEM have gone mainstream. Government services are being digitalised, life is played out on Facebook and the next generation are inseparable from their phones. Job prospects within the STEM sector are at a high and are driving the Scottish economy via a series of new ‘tech hubs’. The opportunity to tell ‘herstory’ is huge. Let’s not repeat the mistakes of the past.

Equate Scotland has said that Scotland needs 140,000 more engineers by 2020. We’re nowhere near meeting that demand, judging from current participation in training & education. There’s an industry wide skills shortage. In 2016 only 5% of engineering modern apprenticeships in Scotland were taken up by women and only 18% of those in digital technology jobs in Scotland are women. We’ll only have a chance of meeting demand if we have all genders participating.

For our own sake, we need many hands-on deck in the Scottish STEM industry. Given our history in inventiveness, innovation and STEM, and the payoff we’ve had from the women participants, we need to make sure that we invest in future Marion Grays, Williamina Flemings and Maria Gordons. We need to invest in our girls and young women, our ‘#LassiesinSTEM’.

Stemettes is an award-winning social enterprise that have worked with nearly 15,000 young women across the UK and Ireland over the last four years. Our ‘free, fun, food’ ethos hosts girls-only spaces for them to be inspired, supported and encouraged into STEM. Last weekend, we teamed up with tech company Methods Digital to host girls from Paisley, as young as 6 years old, at a coding event at the University of West of Scotland. Lots of free food and hours of creative fun later, they presented projects on the theme of ‘Fake News’ to industry professionals.

After the event, 93% said their confidence in their own STEM abilities had increased – 100% would like to do more coding in the future. All attendees rated the experience 10 out of 10. Winners included 7-year-old Isabel from Dalkeith who created an interactive fake evidence news story about the Moon being made from cheesy puffs and 13-year-old Brooke from Glasgow who created a very realistic Fake News site featuring controversial Trump headlines.

“It was really good! The girls were so engaged, it was amazing how easily they picked it all up.”

“The were some high standards of creativity and presentation. The girls were pretty much fearless about getting stuck in with coding. Impressive bunch!”

Our previous work across Scotland has seen Aberdeen schoolgirls spend a day at engineering company Centrica, hundreds of young women attend impactful events in Edinburgh and Glasgow with our partners Accenture, and thousands of young people having their perceptions changed watching our new documentary ‘Eat. Sleep. STEM. Repeat.’ at school screenings throughout March and April. We’re working hard on changing the social norms not only for young women but their entire generation.

We’re introducing these young women to a diverse set of role models, so that we can counteract the lack of technical women they may have seen in media and in real life. Despite low participation, many young women are technical role models themselves. Ellora James from Wick is featured in our documentary and took part in our STEM Entrepreneurship programme Outbox Incubator in 2015. A tech entrepreneur and co-founder of Envirocache, a few weeks ago she was name as ‘The One to Watch’ at the 2017 Everywoman in Technology awards. She is a shining example of what the future of Scotlan looks like and is one of a growing number of future Scottish STEM leaders.

All hands-on deck for these #LassiesinSTEM. The long-established practices of role modelling and grassroots activity need to be boosted by proper media representation (a technical woman in River City or Eastenders perhaps?) and effort from all genders. Men are part of the solution. We’re all bound to ensure that girls and women are uninhibited by social norms or prejudice in their scientific and technological pursuit. Here’s to the future, well-documented, well-celebrated Marion Grays, Williamina Flemings and Maria Gordons. Here’s to the future of Scotland.