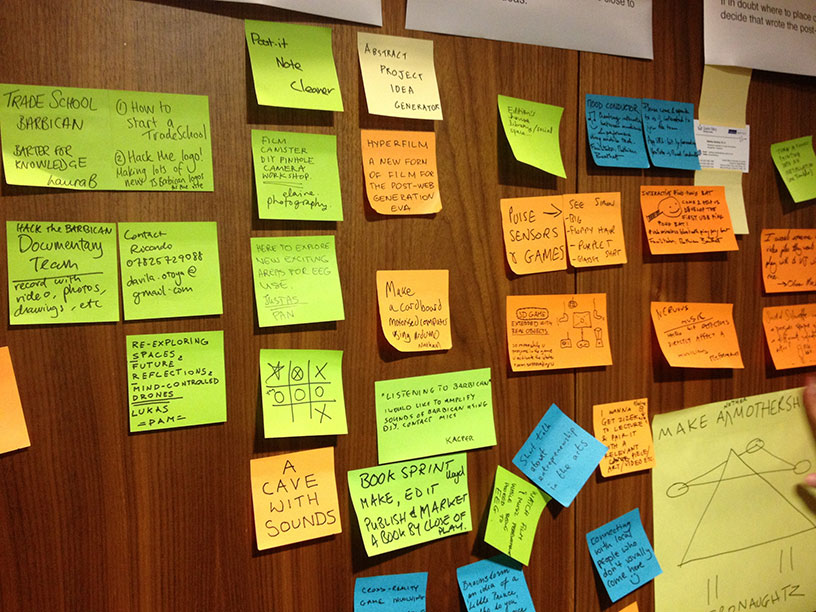 “Making It Up As We Go Along” – Stemettes Hack The Barbican

A couple of weeks ago, the Stemettes headed to East London for a weekend of adventure at Hack the Barbican: Bazaar, a prelude to the launch of an “experimental playground” this summer that will explore the boundaries between arts, technology and entrepreneurship.

This was my first official outing as a Stemette myself and I was excited to join little Stemettes for a hackathon (in trendy East London no less) and do my part to encourage more girls to become creators and not passive users of new technologies. Program or be programmed, right?

I thought I was joining a regular hack, where programmers, developers, and designers came together to beat the clock as well as each other. But Hack the Barbican is no usual hackathon.

What is a “hack” anyway?

Now, if you had asked me about hackers a few months ago, “illegal cyber-attacks” would have been at the top of my list, with “nerds” coming a close second. Pop culture references would have included Matrix’s digital rain and Tom Cruise preventing crimes with an iPad-like interface in Minority Report.

Not only was the figure of the lonely (and always male) hacker something I couldn’t relate to, it was miles away from the spirit of “hacking” I discovered at the Bazaar: at its core, a hack is purely about collaboration, team work and creativity, unconstrained by management and untainted by competitiveness, and there’s much we can learn from it.

“I’m used to boundaries”, shared Christiana, 21, who reads mathematics at university and came along to the event, “and for the first time, I was confronted to not having a correct answer. I had to explore on my own, without any confinement or constraints”.

It doesn’t matter whether a finished product emerges at the end of the weekend; it’s all about the journey, the people you meet and the skills you pick up along the way. In a nutshell: an ideal ground for Stemettes to creatively explore their budding passion for science and technology.

Hack the Barbican: A high-tech playground for grown-ups

Saturday night was a chance to warm up with an energetic ideathon. People got their creative juices flowing, scribbling down projects ideas on bright yellow, orange or blue post-its and stuck them to the wall in the hope of grabbing someone’s interest. A real potpourri of ideas!

A bit of a newcomer to the hacking scene, I didn’t understand what most of these projects were, and dozens of questions kept popping into my head. What do you mean “a cave with sounds”? Can someone explain what an Arduino is? What’s EEG? The list seemed never-ending.

Luckily, this group of hackers was genuinely excited to talk about their project and show off their superpowers over the weekend. And I’m dead serious when I say superpowers.

Did you know your mind could make a helicopter fly? You can use EEG (electroencephalography) technology to harness the power of your brainwaves and control a mini helicopter. The EEG headset reads the electrical activity going on between the billions of neurons in your brain and takes cues from it: the more you concentrate, the better you can control the helicopter. Have a look.

As cryptic as its name was, “The Cave” turned out to be one of the coolest installations ever. Imagine an orchestra, but instead of actual instruments, picture a shadow puppet theatre, a Kinect, a light-sensing device and a couple of computers. Tada! You’ve got yourself a participatory orchestra where everyone is welcome to try out the instruments (we did) and write their own symphony (we failed).

Favourite bit? Having a go at the Kinect and literally watching the motion sensors turn our movements into sounds (which, unfortunately, invited some questionable dance moves).

Other dazzling projects made an appearance. Among them: Hyperfilm or what its creator calls “a new form of film for the post-web generation era”. To counter youth’s increasingly short attention span, she came up with a movie format wherein shots are held together not by a narrative but by a string of browsing paths, enabling the audience to click and choose how they want to tell the story.

A couple of programmers also brainstormed over how to use pulse sensors to incorporate someone’s heartbeat into a video game or to influence an artist’s own musical performance. And what I’m telling you is only a glimpse of the craziness that was going on over the weekend! 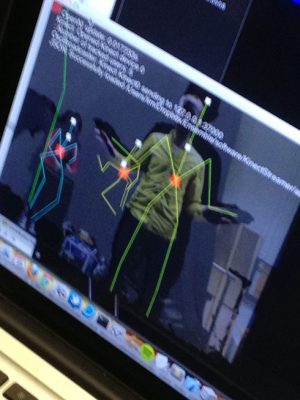 Taking the hack one step further with the Stemettes

Hack the Barbican really had one simple guideline: make it up as you go along. Be creative and see what happens. And both the girls and I were excited to discover how technology and art intertwined and how their boundaries could be pushed in ways we hadn’t even conceived of before.

“There was so much keeping your brain going! I would never have thought all of this could be possible before I came here today” exclaimed Sam, 14, who also attended Stemettes’ previous fashion hackathon. And the intertwining of physics, maths and music in many of the installations fascinated Christiana.

The hack definitely ignited some exciting projects among the girls too, with Sam eager to look into designing: “As much as it is great contributing to people’s ideas, I want to take my own and implement them myself. There’s so much that can be done with technology!” After all, why would you to just buy the latest game or app when you could be the one building them?

And while it is vital to push more girls into STEM fields early on, it’s also never too late to get started. That’s why I’ve decided to embark on a new journey, delving into the wonders of the tech world and finally learning programming. Because in Sam’s own words: “Everyone should have a piece of this cake”.

Sophie works in digital communications for a London-based NGO. A Stemette in training, she someday hopes to build her very first piece of software. In her next life, she’ll come back as an astrophysicist to figure out why the universe keeps expanding. You can follow her at @Snow_phie.