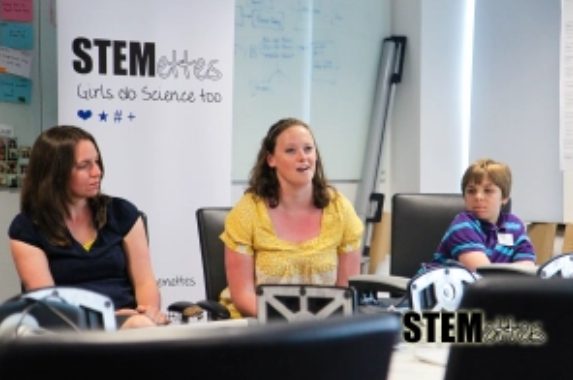 Saturday 21st June marked the first of many events for Stemettes in Manchester, hosted by Thoughtworks in the impressive City Tower; a breath of fresh air in a beautiful city – great start to everyone’s day!

At 2:00pm, we began our Stemettes Panel with a hot bevie and a snack. The panel consisted of six members who let us delve into their experiences of life in the STEM sector; there were five women at differing levels in their STEM journeys and one very insightful young man called Dan. Head Stemette, welcomed everyone to the event, adding info, humour and insight from her very own STEM path. Simultaneously, there was a task to complete which then resulted in fantastic prizes at the end of the event! Two minutes was all the panellists had to unfold their STEM voyage… it’s just amazing to see how people use such a short amount of time to open up such a large amount of info!

First up was Hannah Brotherton. With only two minutes on the clock, Hannah described how starting out from a little town in Wales, gave her the ambition to become a Vet. However, committing to the education route and considering advice from her parents, she opened her eyes to something amazing and far beyond her first desire – Hannah is now one Biomedical degree, two masters and a PhD in the making. Or to put in less daunting terms one hop, skip and jump into her STEM career! She may not be in the process of becoming a Vet, but she is the proud owner of a pet collection and soon, hopefully, the new arrival of a puppy (fingers crossed Hannah!). Her inspiring story and useful advice created the foundation for the day.

“Always listen to yourself and keep believing in your dreams”!

Next up was Helen Lake. After graduating in Engineering, Helen now holds an amazing position in the one and only Rolls Royce! (The makers of all things luxury!), and is now working in robotics as well as exploring new manufacturing technologies for aerospace build facilities. Helen was chock-full of helpful tips and suggestions about how to move from education into the STEM world of work. The golden thread in her advice being, “explore your interests more” both displayed and recommended the importance of pursuing YOUR dreams, and engaging in new and beneficial experiences such as summer internships, shadowing professionals and even volunteering to help gain further understanding into your interests – all in which proves to build up, aid your knowledge and gain experience for interviews.

Third up was an experienced designer for Thoughtworks in Manchester, whom goes by the name Meaghan Waters. Meaghan began, stating how she always loved to build, create and explore various ways of achieving new objectives; and 18 years on this particular desire has not changed in the slightest! Currently (and probably as we speak) she is building as well as creating new software and websites for a range of organisations; there is no denying Meaghan’s passion and energy that spread throughout the room and her advice resonated throughout the Manchester event.

“Don’t doubt yourself” … “Don’t look back, only forward”

The wonderment and insight continues with Jessica Stanford. Studying Engineering combined with German, she became a mechanical engineer in new product design and business development. Again the word ‘explore’ is focused on. Jessica’s job is now taking her to Nepal!

“Engineering is a real passport to travel all over the world”.
“Once you’ve chosen your path, you can always change it and you’ll be surprised how many routes you can choose from”.

From exploration and building to our fifth panellist (who always thought she wanted to be a doctor…you know the job fixing people) Sarah Glanville who now has a incredible job where she finds ways of breaking things. Sarah now leads teams of games testers at SkyBet; STEM has allowed her to gain a role that involves exploring websites, playing apps and finding ways to break it! Although we are pretty much programmed not to break things, Sarah’s job goes against this innate behaviour, where she gets “such a rush of adrenaline” when she does.

Last, but certainly not least was our youngest panellist Dan Mather. He may be under  the age of 15, but Dan already had a massive bank of STEM knowledge. His enjoyment for STEM and inspiration from his older sister is undeniable – they explore different STEM interests together,including Raspberry Pi. Python, plus more!

As the panel followed up with speedy networking, the room was electric. Everyone had the opportunity to spend time with all the panellists and one of the most popular discussions arose from the need for more fashion technology combos!