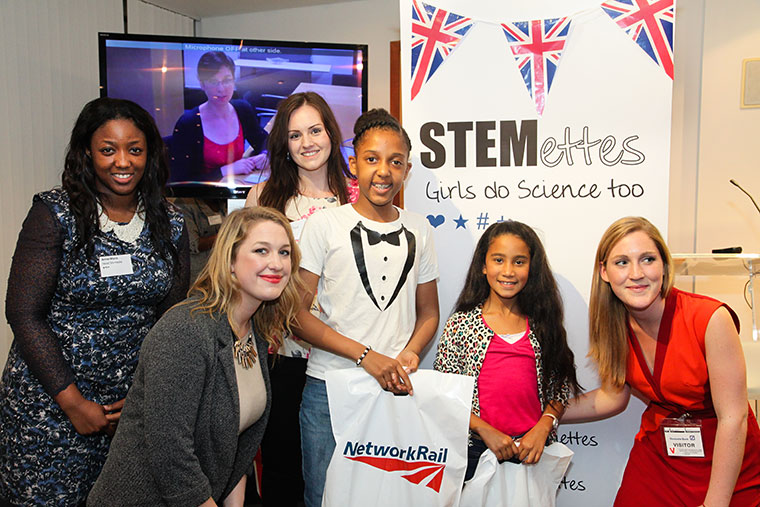 You normally wouldn’t expect to see an all-woman panel of experts on science, technology, engineering and math (commonly known as STEM). And why would you?

There is a surprising consistency in the way women and girls are under-represented in scientific, engineering and technological fields across the world, and the UK is no exception to the rule. British women make less than 10% of all engineers, are only 17% of the technology workforce in the UK, and 2 out of 3 female science graduates don’t work in Stem.

In a country where the STEM skills shortage is a serious economic concern, isn’t it a waste to miss out on half of the pool of people capable of doing science?

Stemettes, an organisation which goes by the motto “Girls do science too!”, is determined to transform that landscape, one girl at a time.

In the spirit of inspiring young girls to pursue a career in STEM, the group asked seven women (and one man) who have successfully carved out a career in these male-dominated fields, to share their experience and expert advice with 30 girls, ages 8 to 18, keen to make the next big scientific discovery.

Showing that girls can do science sounds simple enough and yet, time and again, has proven to be a bit of a head-scratcher. How can we challenge the way we think about women and girls in science? Most importantly, how do we change the way girls and women think about themselves doing science?

This may seem like old news. Feminists were already up in arms about the lack of women in STEM two generations ago and we still are now. So why is it still a problem?

For starters, and as the panelists were quick to demonstrate, gender stereotypes are alive and kicking and can quickly discourage girls from pursuing interests often labeled unconventional, or inappropriate, for their gender.

As the only female in a resistant material course, Ruth Amos, winner of the 2006 Young Engineer of the Year Award and moderator of the panel, initially found herself in the uncomfortable position of being the token girl in class. She was expected to follow the footsteps of a few girls before her and produce the “token jewellery box” for her GCSEs.

Instead, she designed an aid to enable people with limited mobility to use their stairs comfortably, and went on to found her own company, shattering stereotypes about women, engineering and entrepreneurship in one tgo.

Next to her Brigitte West, a second year student in medical science at Newcastle University wh with her friend Rose Brown, writes blog Beauty by the Geeks has swiftly turned it into a business, which reveals the secrets behind cosmetic science. To feed their well-documented blog, as well as their thirst for knowledge, they have spent countless evenings researching and mixing chemicals to come up with cosmetics that actually do what they claim on the label.

“Stereotypes dictate that beauty doesn’t mix with science”, she says, “That’s simply not true. Everything you do involves a form of science.” Even beauty products. Or fashion, for that matter. A few months ago, the Stemettes organised a hackathon for girls to discover and brainstorm ways to bring fashion and mobile technology together.

It may sound trivial but it’s important to address the misconception that girly can’t be geeky. Many of the young girls in the room seemed worried that they would have to give up part of their identities and interests to be accepted into what is essentially a boy’s club. They shouldn’t have to make that choice. This was echoed by the panel which also featured Susan Cooklin (CIO at Network Rail & CIO of the year 2012), Riddhi Prasad (Vice President at Deutsche Bank), Dr Eyman Osman (a geneticist), Amelie Anglade (a software developer at SoundCloud who joined live from Barcelona) and the token ‘mystery man’ Matt Parker (a stand up mathematician).

Gathering aspiring girl scientists and accomplished female scientists around a table is one way for Stemettes to help solve this conundrum. These encounters, both inside and outside the classroom, offer girls a glimpse into the diverse work of female scientists, engineers, mathematicians and techies, and the exciting career opportunities that await girls in science.

“It’s just about giving girls something to go on, concrete examples of professions they could work towards”, Ruth explains, “So that they don’t feel limited in their choices”.

It is undoubtedly helpful to hear from women who too may have struggled with some of the labels they are often automatically assigned. Ruth recalls the reaction after receiving her award: “All of sudden, I was thrown into the world as a “female engineer” and I had no clue what it meant!”

It may be puzzling to negotiate at first but panellists are adamant: women and girls don’t need to give up being a woman to go into science.

You can’t be what you can’t see. For that simple reason, we need more women in positions of leadership in science. If girls are not shown what is out there and how they, too, can carve their path into a STEM profession, we can’t expect the next generation of scientists to be female.

Another problem lies with the way we teach science, as the panellists and the audience were keen to note. Much ought to be said about the inestimable value of a teacher whose passion and enthusiasm are so communicative that they inspire adolescents to think big and out of the box. They are, unfortunately, the exception and when it comes science, as a girl in the audience fittingly put it, “teachers make decimals dull”.

That’s why initiatives like Stemettes are needed to make science more appealing, creative and fun to young girls. Girls often cite “lack of creativity” as a reason why they have favoured humanities over sciences. The myth that science is anything but creative was carefully debunked throughout the night. Science is what you make of it; and you can pretty much do anything with it.

To help show science as a cool and worthwhile activity for girls to do, though, we will need more female role models to engage, support and mentor girls and young women into STEM careers. Importantly, they will need to convey the message that a career in science, technology or engineering is more than a school curriculum. This is particularly true for skills like coding and programming that are still rarely taught in school but that an increasing number of people are picking up through online courses or by joining groups.

This summer, Stemettes will be a running a hackathon where young women can learn a variety of skills, from designing a game in a real programming language, creating a mobile app or programming robots. 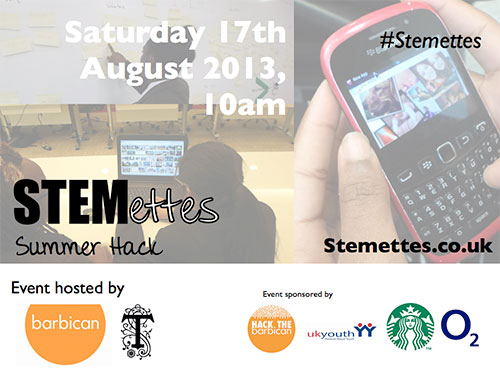 There is no doubt that girls can do science. It’s time we celebrate the achievements of women in science and replicate them on a wider scale.

Sophie is a digital communications professional and a Stemette in training. You can follow her on Twitter @Snow_phie.