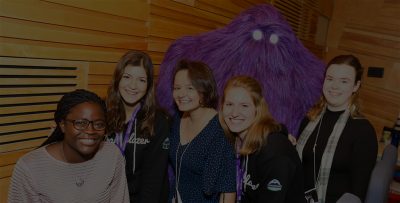 #MonsterConfidence Dublin – It Was ‘Deadly’

Our only Irish stop on this year’s MonsterConfidence tour was in Dublin, at Engineers Ireland. It was, of course, ‘deadly’, and made it onto RTE Radio 1 Drivetime (2h10).

All good days start with a cuppa and this was no different. After a generous round our opening keynote was Rhona Togher, CEO of Restored Hearing. She spoke about her journey to founding her startup, which began with winning the BT Young Scientist competition. She and her friend Eimear turned it into a business and haven’t looked back since.

What roles are involved in tech? #LighteningTalk fr. @ZalandoTech 'Data is the oil of the 21st century' #MonsterConfidence @Stemettes pic.twitter.com/1tO3to2m0Q

Then Alice & Maria from fashion site Zalando gave a lightning talk on the roles they do: Software Developer and Data Scientist – their hilarious memes had the audience laughing in the short 7 minutes allocated.

Great morning at the #monsterconfidence day. The brilliant @SineadBunting sharing her tips and power poses with the girls here today 👏🏻 pic.twitter.com/VUTO4j3I3O

We then split out into the morning sessions. Attendees cycled round mock interviews, speed mentoring and our exhibition room – which was staffed by Veolia. Others attended a ‘Monster’ workshop on Confidence skills whilst presenting.

We were all shortly reunited for a in depth panel session featuring women from Veolia, UTC, Salesforce, Caterpillar and Hosted Graphite – all of whom had had quite different careers spanning all of STEM.

The most important time of the day – lunch – saw as all take a needed break and gear up for the afternoon of sessions.

The afternoon keynote added a new dimension to the day. Roisin Markham, creator of Creative Dynamix shared her incredible journey and brought STEAM (Science, Technology, Engineering, Arts and Maths) to the fore. She’s bounced back from so much and was an inspiration to hear.

After the afternoon sessions we came together and ended the day the same way we have in all locations – with the Soapbox Challenge and some Monster prizes.

Because 140 characters can't sum up yesterday… But honestly neither could 1300 on LinkedIn! #MonsterConfidence pic.twitter.com/h8qYmONHkZ

One mother emailed that evening to say: “My 16 year old who loves Maths and Science but would never consider a career in Engineering (cause it’s a boy’s job !!!) came home having had a wonderfully enjoyable day and more importantly suddenly considering options that she had already discounted by her mid teens.” Job done!

Final stop will be Sheffield, and we’re ready to close on a high!

Thank you to our hosts Engineers Ireland, Tour Prize Partners Veolia and Candy Kittens for being our Sweets Partner. Of course, big thanks to Monster for being the star of the show. For more details about the tour, visit monsterconfidence.co.uk