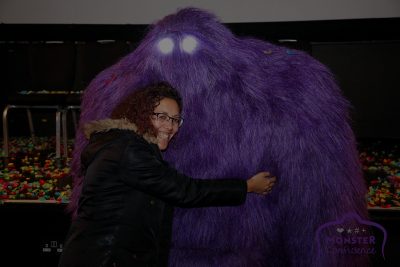 #MonsterConfidence Sheffield – It Was Super!

Sheffield is a beautiful city, and was well known in the 19th Century for it’s production of steel. On the morning of 27th October, it was glowing beautifully in the Sun and we knew it as the final stop on our 2017 #MonsterConfidence tour.

My keynote yesterday at the Stemettes #MonsterConfidence event which welcomed girls doing #STEM from schools, universities and industry.
'The importance of networking and building an online presence' https://t.co/sxiDCC8TjP via @SlideShare

Sue Beckingham, Principal Lecturer of Computing at Sheffield Hallam opened our day with a keynote on the importance of networking and building an online profile. She shared what’s given her confidence building an award-winning presence. She answered lots of fantastic questions from the audience and the day had gotten off to a great start.

We then headed out to our rotations of Monster workshop, Speed mentoring. Mock Interviews and Exhibition stands. An army of volunteers from companies like PwC, Veolia, Sky, Rolls-Royce, NGBailey and the OR Society.

Next up, we gathered together for a lightning talk & our main panel of the Day. NGBailey’s Kayley Lockhead shared her role and the stages of construction for a building – cool animations included. Then our panel took the stage to share pearls of wisdom, anecdotes from their career and specific advice on confidence & STEM. They were followed by a lightning talk from PwC’s Cathy Baxter on their Degree Apprenticeship programme.

I'm also posting on Snapchat and Instagram Story for #MonsterConfidence 💜👾

Experience it with me! 🙌🏼

Our afternoon keynote was the amazing Dr Kierann Shah, General Manager at the National Space Academy in Leicester. She spoke about her upbringing, loosing confidence, gaining it again and then imposter syndrome. She also spoke lots about Space(!)

In the afternoon workshops and rotations continued – with a great level of excitement in the room. We then came back together for a final round of prizes and the brilliant Soapbox Challenge.

Attendee Pauline has written up 5 things she learnt on her blog:

This was a common theme in the conference.

A lot of the women who were up on the panel or I networked with during the day, had told me that they sort of “ended up” in STEM. One of the Sky Software Engineers said that she came from an Arts background and had wanted to be a doctor, curator, artist before. Another engineer had told me that she did her undergraduate degree in History, attended a coding course and completely changed her career. She is now a Junior Software Engineer! Sometimes the journey isn’t as straightforward as going to school, doing your GCSEs, A Levels then University where your degree determines what you’re going to do for the rest of your life.

There’s never a destination. It’s completely fine to change your career! It’s never too late. As someone who is still unsure what to pursue after my degree in Biomedical Sciences, I found this very reassuring even though I say it to myself all the time, it was great to talk to women who were living the tale!

I’m sure that it reassured and empowered the girls in the audience too who are about to chose their A Levels, thinking it is life-determining!

And we’re over and out for 2017! Photos are up on Flickr and the roundup video will be up on our Youtube shortly.