Following on from the success of the Stemettes Launch in February, it was time to delve a bit deeper into STEM careers for girls. At the first ever Stemettes Panel, held in the Charles Darwin House on the 7th March, we had sitting before us eight women and one man. They were there to share their thoughts, their experiences, their lessons learnt and their goals, demystifying the world of Girls in STEM. 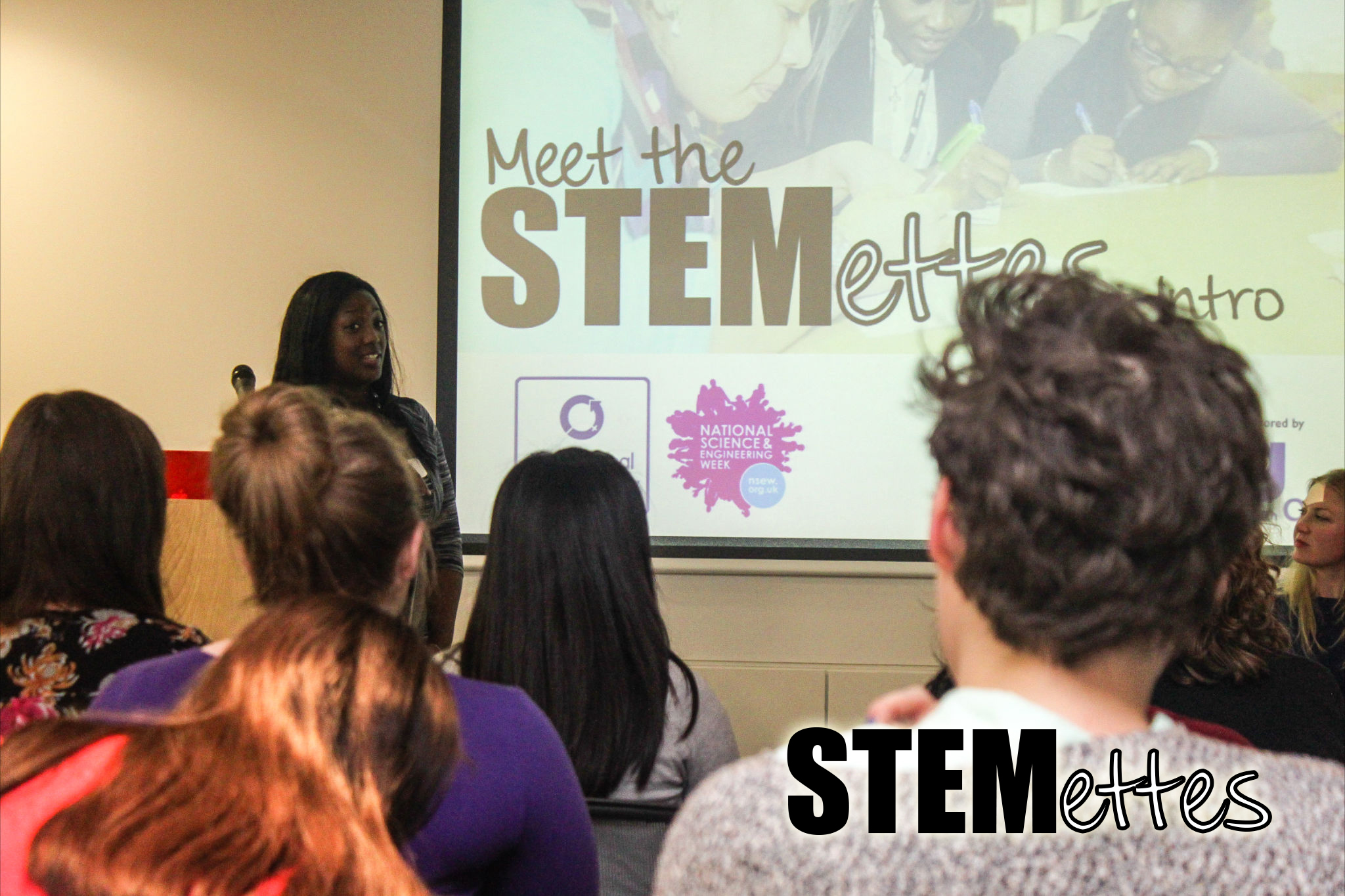 Head Stemette Anne-Marie Imafidon kicked off the evening by introducing the “wonderful women” we had sitting before us, before passing on to our host for the evening – Dr. Melanie Windridge, plasma physicist with a PhD in fusion energy from Imperial College London.

“I don’t know why I got into Physics” she began.

This was a theme that was set to continue throughout the evening. But – I thought – what if we could make STEM, not a career stemming from uncertainty, but from proactivity and certainty?

Melanie passed us over to the panellists, who introduced themselves and spoke about their respective “journeys” into STEM. Some of us were flummoxed by words such as “plasma physics”, “astrophysics”, “robotics” and “particle accelerators” flyingat us from every which angle. Yet these were interspersed with words and interests we could all associate with – “football striker”, “dancer, reader and new twitter user”, “fashion enthusiast”, “violin player”.  These were just normal, well-rounded women who were “doing it their way”, their own version of the STEM way.

Dr Suzie Sheehy, our first panellist of the night, was certainly proving that. A PhD in Physics in her possession, working on the CERN accelerator project, but also creator of popular blog High Heels In The Lab (highheelsinthelab.blogspot.com). Wearing flat shoes that night to protect her pins for marathon training, I looked around at the other female panellists – 8 well turned out STEM women, all in heels. No female in this room was following any kind of geeky techy scientist blueprint, but doing it their way.

Suzie helped us to understand the very strong application of Science to our everyday lives and the appeal this had for her, yet another theme that prevailed throughout the evening. “It’s about what we don’t know” she told us; taking the “unknown” in the everyday that we so often take for granted and turning it into the “understood”. Suzie had studied cancer treatment, as well as new ways of generating energy; our next speaker, Bee Thakore had used her expertise in Aerospace Engineering to work on the jet engine and even send a lego robot into space, when she began to specialise in Robotics.

Selina Pavan was next up, Vice President at Bank of America Merrill Lynch and Editor of City Women’s IT Network She brings must-have elements of Science  and Tech to City traders to allow them to keep the stock markets ticking over. She is a scientist, but she is a corporate lady of the City also; who said STEM had to be confined to the Science lab?

Gradually I saw the walls between “non-STEM” people such as myself and the STEM careers that we had considered “out of bounds” break down brick by brick. Cassandra Harris confirmed this. Starting off in Marketing at a Global Media and Advertising Agency, she has since co-founded Freeformers –  a social enterprise which teaches young grads digital and tech skills, as well as invests in tech-start ups. It seems there is no “regular” in STEM careers.

And the variety continued. From Jaz Rabadia, who studied Engineering and went from checkout girl at Sainsbury’s to managing the energy use at Sainsbury’s across all their branches after seeing an opportunity and seizing it. “Being young, being different, being female was a benefit” she proudly told us. To Roma Agrawal, a structural engineer who has spent 6 years working on the Shard. Onto Dr. Alison Leary who uses her Science background and post-grad medical degree to work in cancer care and on the government-run National Cancer Action Team… And finally Neil Ford, the only male panellist, calm and confident in his “Keep Calm & Hack On” t-shirt, he talked of his varied career and the Hack Days he now runs. Think you can’t get involved in a hackathon because you don’t have the techy skills? “Just turn up and have a go” he says, “If I can do it, anybody can”.

After the panel introductions there was a chance for the audience to ask the panel questions,  covering hackathons to the daunting nature of huge science and engineering projects. Each of the panellists then imparted their closing pearls of wisdom on how to Get In, Stay In and Make The Most of a STEM career.  Inspiring and uplifting quotes from women who had clear personal visions abounded; “dream big”. “have a vision”, “Don’t be scared because you can do anything you want”, “If you don’t see the barriers, they won’t exist” and one which really resonated for many of the girls (and women!) “if you love what you do, you’ll never work a day in your life”

We popped out for a quick session of networking; the room was buzzing with people eager to get round the different panellists and find out more about each and every one of them and their distinct and varied personal stories. Once corralled back into the room, prised out of our networking bubbles, prizes were handed out to the winning girls (and boy!) who had been filling out question sheets throughout the evening. Photos taken, STEM smiles gleaming, it was time to pack up our new found inspiration into our party bags and make our way home, vowing that we would make a difference – at least, that’s what I did.