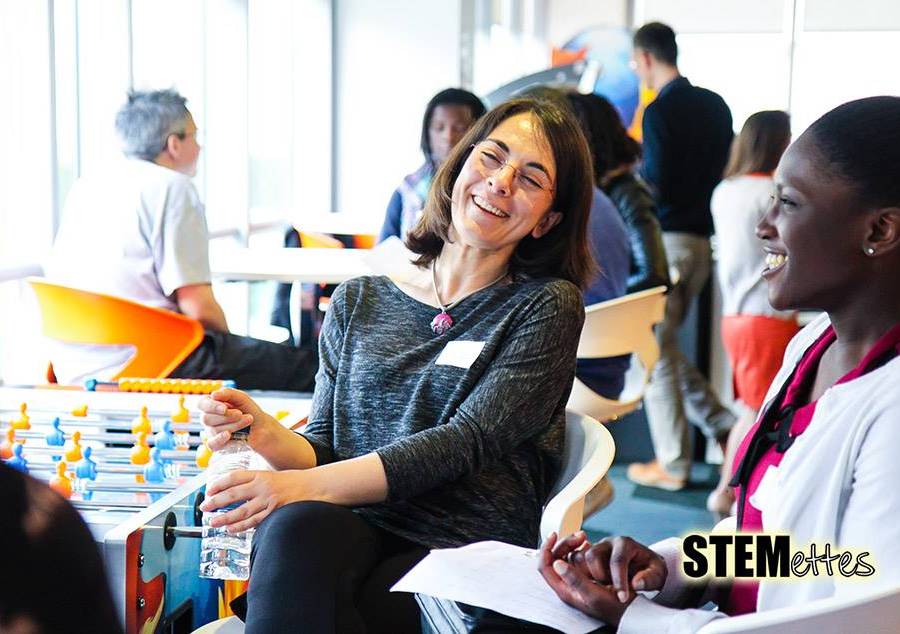 Munching At Mozilla This March With The Stemettes

Share this page
“Wow, free food and drinks” cried the children as they sped through the doors and into Mozilla’s London office in the heart of central London. This was how pretty much every attendee joined us on Saturday for our London Panel, sponsored by Mozilla and Technopop – anyone would think that Stemettes don’t get fed at home!
Thankfully the food didn’t stay at the centre of attention for the whole time. Soon the girls were sitting around on sofas and beanbags, ready to listen to the line up of 7 fantastic women in STEM that we had gathered for them to listen to.
The day started off with some networking and ice-breaker games, in true Stemettes fashion. One great game was that once the Little, Big and supporting Stemettes had scrambled around to get into their correct sized groups (quick sticks!), they had to come up with a mobile app that helped encourage more girls to get into STEM, be that a career or further study. We had some great ideas, including a kind of STEM roadmap, where girls could find out about careers and see what steps they needed to take to get there. There was also a Maths Tracker which featured amazing and inspiring women in Maths, and even had a “nominate your friend” functionality, where users could put their friend forward as an inspiring and influential woman in STEM. The day had got off to a good start.
Then it was time to get the girls sitting down again and introduce the panellists. We had 7 amazing women, the details of which can be found here. You may have noticed that among these amazing women were impressive roles such as a weapons analyst, games tester and a former aerospace engineer for NASA. We are always so wonderfully surprised by the calibre of women we get putting themselves forward to sit on our panel – we don’t even have to chase them, they want to be involved!
The girls listened intently as each of the women introduced themselves for 2 minutes, as moderated by the lovely Sophia, our Stemettes panel host at all of our panel events this year. We heard of how some of them “fell into STEM”, how some of them “always knew” that they wanted to work in Science; how some had had an easy ride, and how some had struggled; how some have only done one thing in STEM, how some have had many STEM jobs, and how some have had both STEM and non-STEM jobs. There was something there for all the girls, and I know that some of the panellists even learnt new things about themselves, careers and STEM that they didn’t know before.
Then it was over to Sophia and the audience to fire questions at the ladies on the panel, as is our usual style. We had fabulous questions as always from asking about the best thing about working in STEM, to asking about challenges they faced, to talking about the lost plane in Malaysia and asking if STEM might help them to understand the trajectory of the explosion and thus be able to find out where the plane exploded when they found the first pieces of debris. Topical!
This was our most interactive panel to date, as it was also a much more intimate group. We set up Stemette Stations, which the girls rotated around in a speed-dating fashion. Both Little and Big Stemettes asked our panellists questions, while the panellists were also just as interested to learn about the girls – what motivates them, what demotivates, why STEM, what in STEM and more.
The day ended in much the same was as it began – the kids raiding the last of the food and drink supplies. I can vouch for the fact that there was no fairtrade chocolate left by the end of it. Food or no food, we would like to thank Mozilla, our hosts and sponsor who provided us with the venue, space, food and hospitality. Also a big thank you goes to our friends at Technopop who also sponsored this event.
Lastly, a big Stemettes thank you and shout out to our ladies who sat on the panel – Sarah Glanville, Laura Birtwell, Sally Davis, Amanda Birden, Lauren Scarleett Tomas & Melinda Seckington. You guys made the event, and will forever be Stemettes!
Share this page
Stemettes The latest from the Stemettes Zine, a curated space tailored specifically to Stemettes
Go to the zine