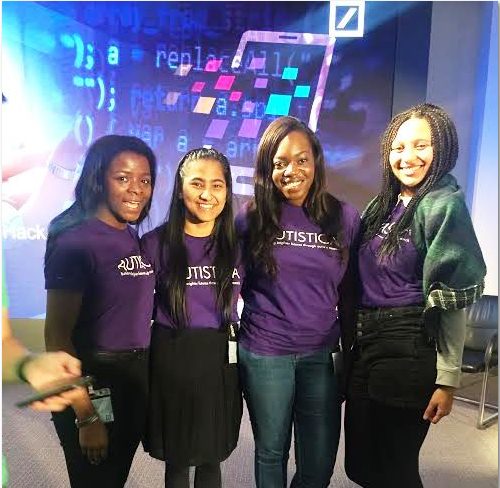 This blog post has been written by Oishi, 22, who is studying for a degree in Software and Electronic Engineering at the University of Leicester. She is currently on our more-than-mentoringShe won Gadget Show Live tickets in February as part of WednesdayWins on our OtotheB app.

I attended the Autistica Hackathon, organised by Deutsche Bank on 9th and 10th November 2016. On 8th of November I travelled from Leicester to London and stayed the night before in London to attend the hackathon next day.
The aim of the hackathon was to develop apps for Autistic people in order to help them with their anxiety. As I am part of the ‘Student to Stemette’ program, I was really pleased to be one of eight Student Stemettes to be selected to attend the hackathon. I was in a team of eight people and our team name was ‘Grey Beard’, the name came along because most of the members in my team were very high up managers, directors and in fact included the CTO of the Deutsche Bank. Initially, I thought it will be challenging to be in the team with these very experienced and high up people but, I was very amazed to see they were very humbled and it was great to network with them.

It was 24 hours global hackathon, where teams participated from around the globe which included St. Petersburg, Frankfurt, Bucharest, Pune, Bangalore etc. We started around noon on Wednesday the 9th Nov, with a brain storm and soon became clearer on that we were planning to achieve. We used the Amazon Web Services (AWS) and utilised the cloud-computing service to host our app. We used various AWS resources and infrastructures such as Amazon EC2, Elastic Beanstalk, Dynamo Database etc. Our app was aimed for parents, carers as well as autistic people. It records the time and location of any event happened and provides a history, which is useful for carers to track the behaviour of the autistic person. Another feature of this app was to provide various remedies to autistic people to manage their anxiety.

Next day, around 1 pm the hackathon stops and it was the time for presentations. Various teams from around the world presented their ideas with great enthusiasm. I enjoyed presenting our app along with other team members and I thoroughly enjoyed the whole event. Through this hackathon, I got the wonderful opportunity to network with the graduates and other Deutsche Bank employees, and found out more about the friendly and welcoming working environment at Deutsche Bank.

Overall it was a great experience, our team received a ‘Certificate of Recognition’ for outstanding performance and contribution in the hackathon. The two days were well spent and it was the time to head back to Leicester.