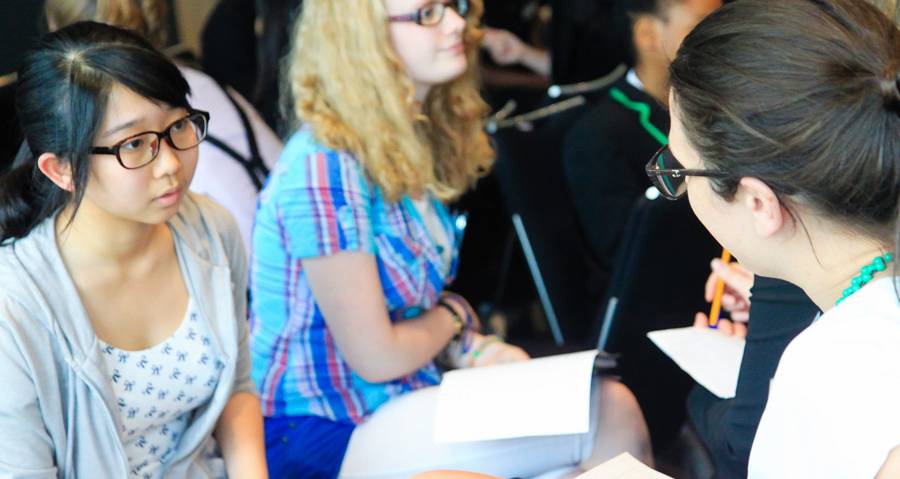 I’m writing as a previous mentee (now known as Sherpee) to give you an insight into what a Sherpa means to girls like me who want to know more about STEM. My name is Ellie, I’m 18, I’m going to university next week and I was in the first cohort of Sherpees to be put forward onto this very scheme.

I thought that since the launch, Student to Stemette has been and still is a great idea and I am so happy I took time applying for it. Along with Sherpas from Deutsche Bank who could help us give their point of view as females who took STEM degrees we also had webinars every month. These were online seminars – webinars – which we could tune in live online and listen to females who were working in academia, industry and recruitment. So for example there was a lady who worked at Cambridge University who talked to us and at another time there were two student apprentices who told us about their past experiences in a more hands-on “earn while you learn” environment rather than going into further education like university. We could ask any questions via submitting them online and they’d answer them for us there and then. There was a wide range of topics that were discussed and it was accessible to anyone, even those who hadn’t managed to gain a Sherpa.

To have a wealth of information given to us in such a way was very useful and it really boosted my confidence, those women in the webinars sounded so cool and it made me think things like “Yeah you know what, I’m going to go into STEM, I want to be like them and I’m going to help improve the gender imbalance. I’m going to show the boys that girls can do it too and it’s going to be awesome” and then of course, we had our own role models, someone who wasn’t just on the other side of a screen, someone who we could properly talk to, the Sherpas.

My Sherpa helped me during my last year at school and through the matching process I found that my Sherpa and I had some things in common. We initially bonded over the fact that we’re both half Japanese and we started talking about how well the team were doing in the Women’s Football World Cup which was on last year at the same time as matching. However, more to the point, she had a STEM degree and it was in a field of STEM that I was considering studying at university.

The last year of school, year 13, can be a very confusing time. Only three years before we’d narrowed our subjects down to 10 for GCSEs. For A-level it went down to 4 and then 3 and then we have to choose one degree to study at university. That’s not such an easy task especially for 17 year olds. Who thought it would be a good idea to get teenagers to decide important life choices? Having a Sherpa meant that I had someone to talk to, someone who’d gone through the same process as I was and really knew their stuff about STEM in further education and beyond.

I’d gone to an all girls school and the number of girls going into STEM wasn’t great. Teachers could help with girls who wanted to be doctors, chemists, biochemists, dentists…but no one could give me advice on engineering or computer science. The closest I could get to was a physics teacher who’d done an engineering degree way back when but converted to physics.

Having a Sherpa meant that I had someone who I could talk to who had experience of what STEM is like in higher education and that was what was important to me so I knew I was making the right decision when submitting my University UCAS application form. I’d sometimes have meetings with my Sherpa and when we met I’d ask about what she did in her Computer Science degree and how she finds it useful in her job now. Because she got to know me personally she could advise me on what she thought what course would suit me and I found that really helpful because we’d previously never met before. My Sherpa hadn’t known me for my whole life so she wasn’t particularly biased to what she thought I could do like my parents and she gave advice by what experiences I’d told her I’d done in the past and what I aspired to do. Up till then when I’d ask some of my friends for career advice I’d get back a “Well you code so I’d say do Computer Science, engineering sounds more like stuff with cars and wires”. Their advice wasn’t great but my Sherpa really helped me get to grips with what STEM education is all about. Her ideas were a fresh change to what I usually got.

Student to Stemette was beneficial to me because it was an experience which helped me as a sixth form student applying to university confirm my thoughts on whether I definitely wanted to go ahead with my career plan of doing a STEM degree. I was shown that females can do it too, it was something else I could put on my university application and I was one of the lucky five who got to attend the Grace Hopper Conference last year in Phoenix, Arizona. It’s all because of Student to Stemette I got to improve my networking skills whilst learning from inspirational people who were tackling the gender ratio head on.

Student to Stemette helped me build my confidence. It reassured me that I wasn’t the only girl who liked doing science. It’s a scheme which gave me a helping hand from someone who was just like me. Student to Stemette literally, I kid you not, made my STEM career.

I am only one story, there are many more girls who have had Sherpas on this programme and I hope that reading how useful a sherpa was to me has inspired you to sign up and join the programme – for a new cohort of girls who are going to change the world.