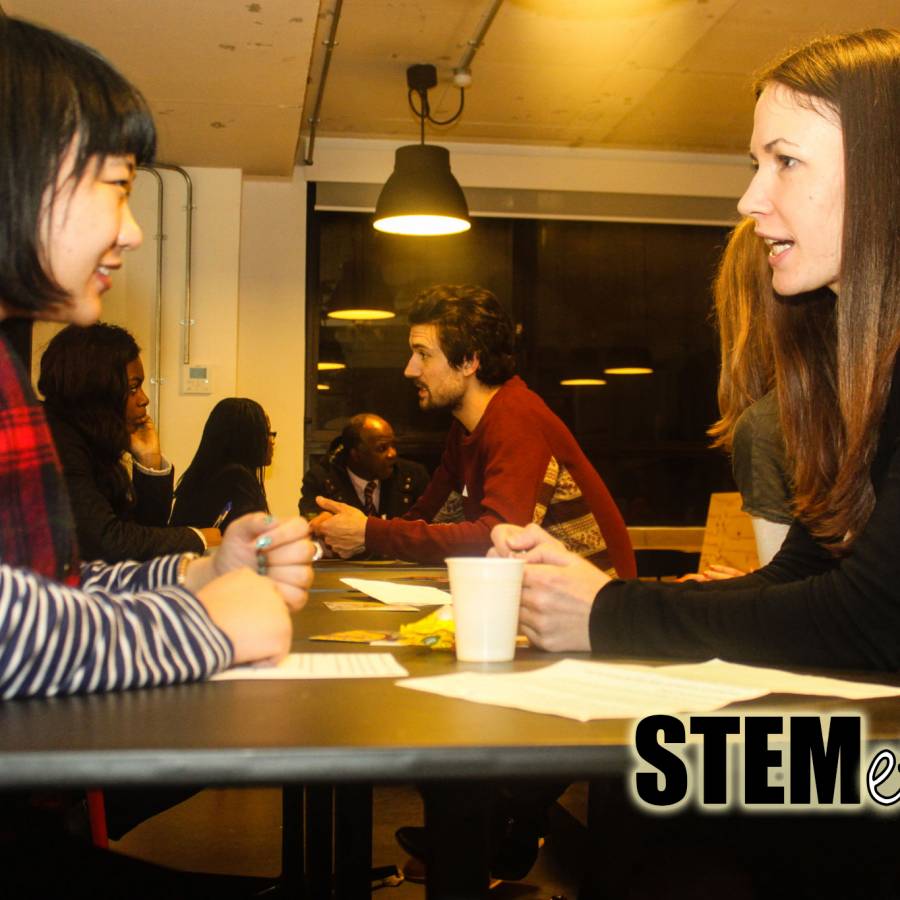 On Tuesday 12th February, at 7.05pm we began the official launch of the Stemettes. The room was packed with girls, students and women & men from across the STEM industry, eager to hear about the Stemettes, eat pancakes and get stuck in with the evening activities.

Anne-Marie opened the event and was swiftly followed by Rob Johnson (@startuprob) of the Makers Academy, a part of the Forward Internet Group who spoke about his recent experience at a Tech Startup conference in the states, where he was one of very few men in the room. He found it awkward – and sympathised with those going into the industry who may feel the same. Rob’s main message was ‘Stick with it, ignore the awkwardness’.

Following that, we watched some words from Baroness Susan Greenfield, a neuroscientist and Professor of Pharmacology at the University of Oxford.

Anne-Marie then gave a brief background on herself (see a short bio of her here) and of the Stemettes project. She spoke about speaking at the Grace Hopper conference last October and hearing Nora Denzel’s keynote on encouraging females to stay in Tech and recruiting more females to the sector.

After enjoying the american accents, american food and filling a suitcase with freebies from the conference, Anne-Marie got back to the UK and looked into the situation here. She found that the proportion of women in the UK STEM workforce in 2011 was 17% and had dropped to 13% in 2012. So Stemettes was born – it’s not right that so many females aren’t involved with such an exciting and important sector.

We then saw five examples of why STEM is cool:

Anne-Marie detailed the 3 types of events that Stemettes will be doing this year:

Lopa Patel MBE shared words on her story and what she’s learnt along the way. She studied Computer Science and now runs successful businesses in Logistics and the Media. She advised the girls to keep in mind the commercial viability of what they do, and ensure that they kept doing Science as it will be a very good skill to draw on in the future, and distinguish them in the world of tomorrow.

Then it was game time – there were three activities given to attendees on arrival, according to age (11 and below, 12-15 and 16+) and the networking began. Pancakes were eaten, Pairs and groups talked and pieces of paper were flying around.

At the end of activities, we heard from Vodafone Networks (courtesy of Rare) and Selina Pavan who had both pledged to support the Stemettes. We announced the winners of the games, grabbed a few pancakes and then went home!

We’d like to say thank you to all of our event volunteers who ensured smooth running of the event, our event sponsors Inspirational YOU, Impact10, Google Campus London and Vodafone Networks. Coverage of the event is up on our Facebook page.

The aim of the launch was to give everyone a flavour of what is to come this year. If you’d like to sponsor or support the Stemettes, as an individual or a company, email us on stemettes@gmail.com