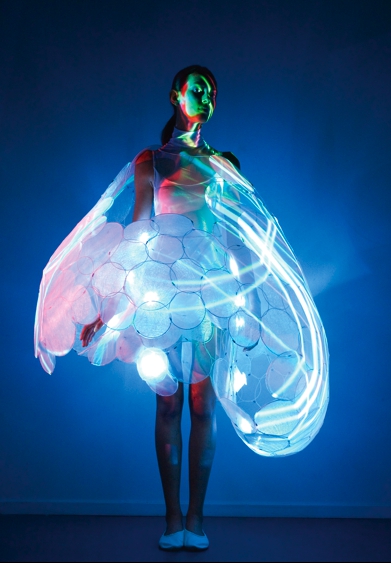 The Proof Is In The Hacking: Mini Fashion Hack With Freeformers

If you’re like I once was, when the word ‘hackathon’ is uttered, a glazed look will pass across your face as you look into the ether and imagine Matrix style lists of green numerical digits, whizzing up and down screens, with a bunch of intimidatingly techy men flapping with great importance around a computer, typing at the speed of light, trying to crack some kind of system. Code cracked, big bad boss’ computer broken into, “hack” successful. In my mind, a “hack” was something I could never, nor would ever, be involved in.

Thankfully, a Mini Fashion Hack on the 9th April led by Cassandra Harris, Co-Founder of Freeformers (Freeformers share the same vision as the us at the Stemettes: to encourage more girls to play an active part in driving technology and pursue careers in STEM), supported by the Stemettes, was on hand to put me right.

The Mini Fashion Hack was kicked off by Cassandra Harris herself who framed the evening’s activities for us: “Making Digital Ideas Happen”. Led by Cassandra, we were navigated through the ever-changing, rapidly shifting world of Wearable Technology today and into the future. Lilypad Arduino interactive garments, which utilise sewable electronic modules to create highly dynamic fashion pieces; the yet-to-be-released iWatch; colour changing LED Tshirts, seemingly with a mind of their own. Now it was our turn to brainstorm and conceptualise our own fusion of Fashion and Futurism. Suddenly I wasn’t too bothered about my long-lost Matrix aspirations; I could sense that girls and adults alike in the room were as eager I was to launch into this equally futuristic and mind-boggling universe where far-fetched tech ideas could potentially become reality.

The brief was simple: an “ideathon” (typically this forms the beginning stages of a full-blown hackathon, but the majority of our mini hack) to come up with ways we could bring fashion and technology together, supported by a new mobile app. Cassandra gave us her top three tips for a successful hack outcome: aim to create something ‘beautiful’, something ‘positive’, and with a ‘utalitarian purpose’. And so, using a number of Application Programme Interface (API) cards – a set of commands, functions, and protocols which programmers can use when building software e.g.  the basic “tweet” on twitter, the ticker at the side of Facebook etc. – from highstreet retailers such as ASOS, Zara, Oasis etc. and pairing them with various applications e.g. games, Facebook, Twitter we began to create our own beautiful tech-fashion masterpieces that could conceivably change the world we inhabit today.

Brainstorming, doodling on white boards, compromising, wild gesticulating, questioning and even acting out ensued as, split into our small groups around the room, we were set free to run wild through the fashion-tech-scape that had been laid out before us.  Clearly, Wearable Technology was a topic that not only inspired, but inspired extreme innovation. We gathered round to hear what each of the teams had come up with, and the final responses were as broad as the brief itself: clothes that tweet themselves with their own hashtag; a “Sales Item Locator” app that would allow us to triumph over the haphazard chaos of fashion sales; an “I have something to gift” app, leveraging the power of community and social enterprise; app-customised clothes; and A-SOS, the ASOS created “get me out of here” clothing based sensor which could alert a friend to a tricky “SOS” situation you need rescuing from. But the winning team brought us not just a cutting edge technology driven piece of clothing, but one with a socially beneficial edge to it also; “connecting the physical world with the virtual”, the final team introduced clothes which could act as a health monitor and potentially tackle obesity. “Not sure the Matrix ever contributed to improved national health”, I thought to myself.

So the proof really is in the hacking. As a room full of women, men, guys and girls, we had all created the basis for something which could then be coded into a real life app or piece of wearable technology, regardless of whether we knew what a hack was before we had turned up or not. And so it is with great pleasure that I echo the words of one of our Stemettes panellists in March: “if I can do it, anyone can”.

The Stemettes will be part of another hackathon very soon: ‘Hack the Barbican Bazaar’ on the 27th/28th April.