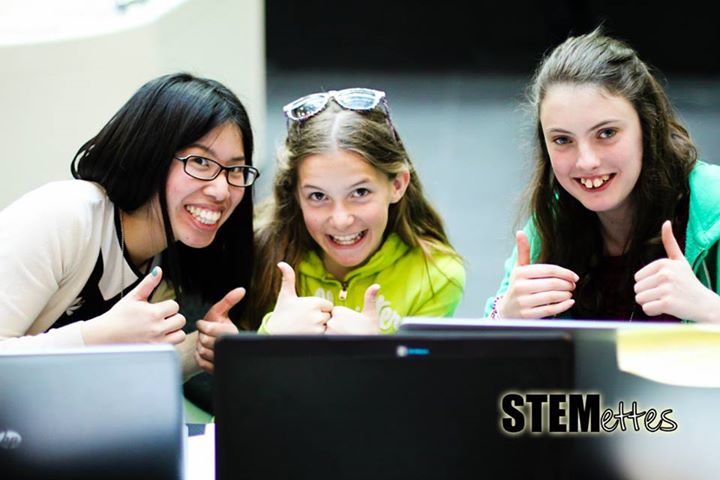 Stemettes’ Spring Hack was held at Bloomberg last week and it was a HUGE success. Over the course of two days, countless apps were built, quizzes made, and cats were shaken*.

The atrium of the Bloomberg offices was filled with the chatter of teachers, parents and volunteers at the start of last week as the Stemettes Spring Hack took place. Going on the ‘Spring’ theme, Head Stemette started each day with an introduction, explaining the plan for each day and getting everyone to know each other with some networking games.

So large was the army of hackers that they were split into three – some used AppShed, some AppInventor and the final group got coding using Ratchet. The little Stemettes picked up the tools quickly, helped along by willing volunteer teachers, and got to creating apps ranging from information sources to fun celebrity trivia.

As the day wore on Bloomberg were on hand with delicious lunch and refreshments, all served in the centre of the workspace itself. After everyone was fed, a few of the Bloomberg took the attendees on a tour of the Bloomberg offices – from the giant fish tanks to the huge canteen. In the final two hours of each, everyone picked up the pace to complete their projects to the highest quality possible… and we were not disappointed!

Each day wrapped up with fantastic presentations from the committed hackers. Those that competed for one day were in different categories – and prizes were reserved on the second day for the two-day hackers, who really were in a league of their own. The judging panel varied each day – featuring experts ranging from professors to financial analysts. They gave excellent feedback and made expert choices. While they considered their choices, a mammoth voting session took place for the people’s choice awards – and finally the winners were announced. Successful projects included a shopping list, and Easter-themed recipe app, and the fantastic Shake-A-Cat app that displayed the internet’s wonderful cats on demand.

Goodie bags were collected, thanks were given, and finally the event wrapped up – just in time to start again the next day! Everything was better, smoother, and more familiar on Tuesday – so great that we cannot wait for the next hack!

HUGE thanks go to our judges, volunteers and the dedicated parents for coming along. We are also very grateful to Bloomberg for hosting and sponsoring the event – especially Rachel, Christine and Kenny for all their help in organising. The photos are up on Facebook and Flickr – check out our Instagram too! Our next hackathon in collaboration with the London Geekettes and sponsored by Winton Capital will take place on 19th & 20th July in Hammersmith.

*no cats were harmed in the course of this hackathon.