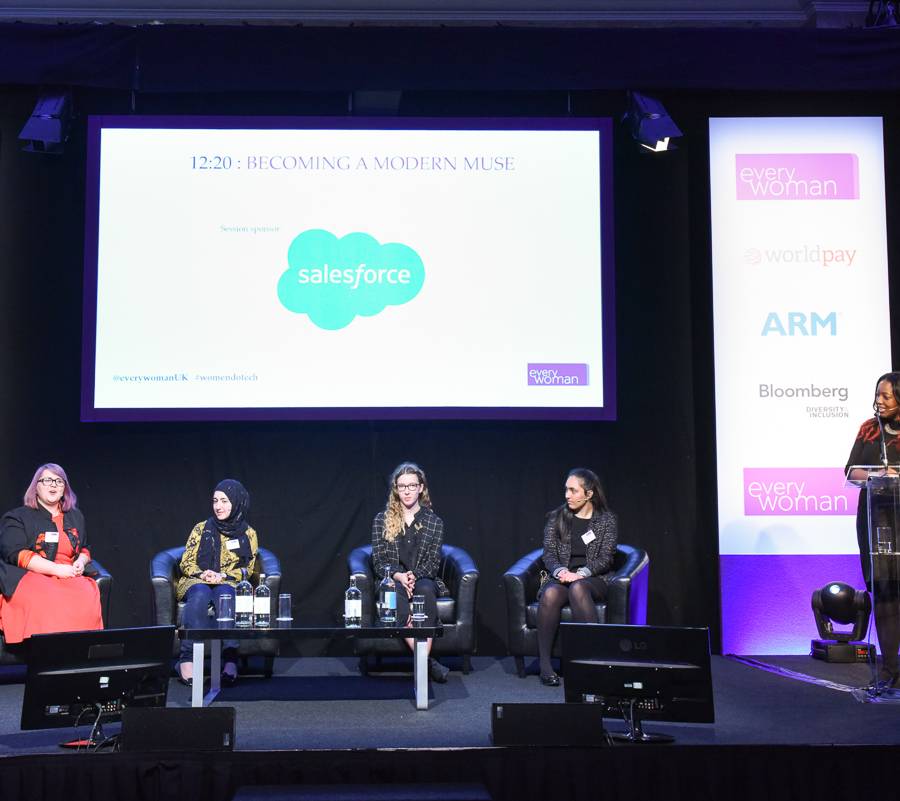 We Came, We Saw, We Modern Mused

For the last 18 months the Stemettes team have been helping Everywoman UK and BP work on their Modern Muse project – to create an app of inspirational women in tech for young women to follow along with. As part of the launch of the app and the 2016 Everywoman in Technology Forum we ran a panel of Student Stemettes talking about what inspires them and why the Modern Muse app is needed. They spoke in front of an industry audience of 500 about their experiences and STEM aspirations.

Here’s how they found the experience:

“Having the opportunity to talk in front of over 500 women in technology was one of the best experiences I have had in my life so far! The thought that all these amazing women want to nurture and support the next generation of female tech talent brings me so much hope about the future of women in technology.” – Alex, 22, Oxford

“The everywoman forum was an inspirational and motivational conference for which I am eternally grateful that I could experience such an event like this. With a crowd of 500 empowering woman, nothing felt impossible and during our panel session with Anne-Marie, convincing these women from all walks of life to join Modern Muse was not at all challenging – but of course it was daunting at first! As I got comfortable in sharing my experience, I spoke passionately about how it felt being a young female in STEM, and so we all relayed our message out to the audience of how we needed their support. They did not let us down. Ultimately, the event was marvellous and an eye-opener as to the whole range of opportunities out there in STEM; the event has provided a catalyst for a movement into getting girls into STEM and it will definitely succeed.
During the lunch break, I met some great woman from Worldpay. As I was queuing for lunch, I started a conversation with two women who were there on behalf of Worldpay, they did not hesitate to answer our questions and were open about their experience into where they are today. Upon hearing some great advice from them, they were very informative and friendly – we connected on social media and I realised that I had formed a great connection with great women in tech!”– Amanjit, 17, Essex

“On Tuesday 23rd of February, I journeyed from East Yorkshire to London for the Everywoman conference. Although I’ve been involved with the Stemettes digitally for a couple of years, I’d never taken part in an event so I was really excited! I knew that I would be taking part in a panel with other young women, but I hadn’t thought about just how many people would be in the audience. Once I arrived and saw everyone sat in front of the stage, I felt intimidated but was soon put at ease. We got such a supportive vibe from the audience, which was surprising to me considering how successful everyone in the audience was. How could they be interested in me, when I haven’t even finished my A levels yet? This became clear after the panel finished. So many women came up to us, to congratulate us and to share similar experiences they themselves had of being deterred from taking STEM subjects at school, or having had their abilities doubted just for being a woman. Although speaking in front of such a large audience was a new and useful experience for me, the thing that I learned from the most at the Everywoman conference was speaking to people after the panel. It’s amazing to know that a support network is out there, and it was lovely to be given such encouragement and praise for voicing our opinions and studying STEM. I feel much more confident as both a scientist and a woman after this event, which I attended thanks to the Stemettes.” – Phoebe, 18, East Yorkshire