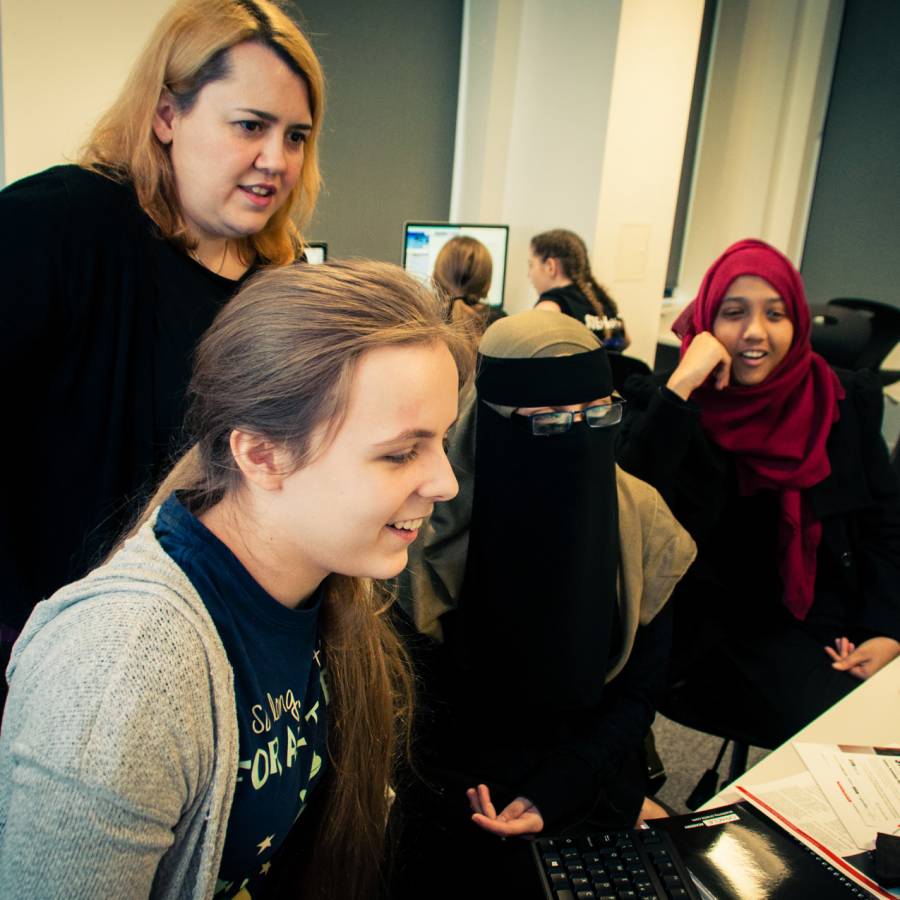 Manchester is a fantastic city with so much going on. This weekend, we were excited to be a part of it all –  hearing lovely Mancunian accents and sampling the fantastic rain.

With Christmas around the corner, Oracle Academy had given us access to their fantastic Alice animation software and tutorials so the hackathon theme of ‘Yule’ Animations was a no-brainer. The fabulous UTC@MediaCityUK hosted us right in the heart of the UK’s MediaCity and so creative juices were flowing.

Saturday morning began with pastries, fruit, tea & coffee for our eager hackers  – some of whom were early and so got best pick of breakfast. We warmed up and introduced ourselves to each other in the Stemettes way, with some signature icebreakers and then got right into Alice.

An hour later we had coded talking bluebirds, dancing snowwomen, spell-casting witches and hiding sharks. Alice was playing host to all kinds of scenes and even parents were getting involved. Our wonderful group of volunteers, a lot of whom had joined us from LateRooms’ offices in Manchester helped us along.

Lunch was two floors up in the UTC’s “Sky Lounge” which boasts great views of MediaCity and a rooftop pitch(!). Sandwiches, crisps, fruit and muffins later we were back hacking – this time with dancing hippos, walking elephants and ski slopes.

For an afternoon break, we had a tour of the fantastic UTC facilities. We saw Radio station booths, film studios and the odd drumkit before having a bit of a play on the pitch. The day ended with some good progress made on animations and the beginnings of games forming.

When we returned on Sunday morning, the mood was still fun (we are slowly becoming Beliebers) but felt a little more tense. Judges Iris Lanny, from Oracle and Outbox Incubator Executive Amy Mather were in the building. Iris spoke about her career and careers in technology widely and at Oracle. We did some more icebreakers and then got down to business – the final countdown!

Lunch was the same but everyone wanted to cut it short to finish up their animations and presentations before Demo Day.

Our third Judge, Clare Sudbery from LateRooms.com arrived just as we were setting up for Demo Day and the judging began. We watched 18 animations and played 2 games – all created by Stemettes aged between 5 and 19. The judges had a hard job, as did our audience who did their bit by voting for their “People’s Choice” awards.

We handed out prizes: trophies, speakers, amazon speakers and a visit to the LateRooms offices. Then the weekend was over. A huge thank you to our sponsors Oracle, hosts UTC@MediaCityUK and prize sponsors LateRooms. And a special thank you to parents and guardians who brought their Stemettes along.

So why was it a great idea? 95% would love to do more coding and it got 9.22 out of ten. 100% of the attendees would like to come to another Stemettes event.

Girls not only learnt about coding, but met real people from industry, and learnt important technical basics. Lessons they won’t ever forget – like saving your work regularly. They also got to share their work & creativity with others. Some did pair programming and most presented their work at Demo Day.

In the words of our attendees:

“I enjoyed learning how to use a software I can actually afford to download at home, rather than being excited about a really cool coding software and then realising it is hundreds of pounds a month.”

“I enjoyed seeing the people laugh at our animation.”