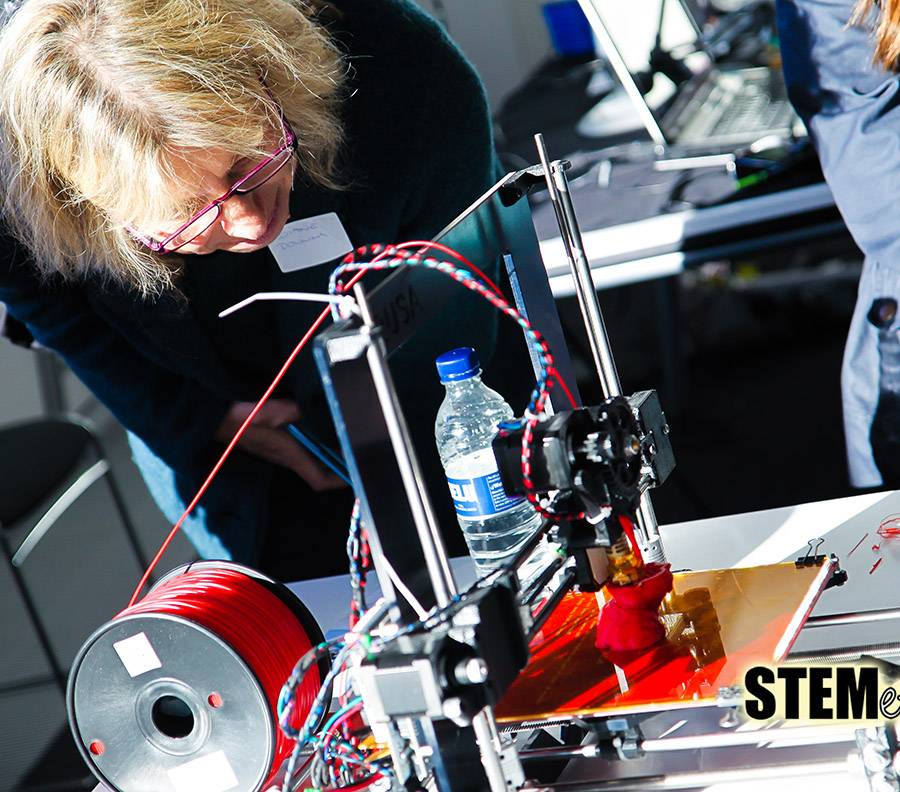 On a crisp Saturday morning, the Stemettes descended on The Crystal building in Docklands – a building dedicated to Siemen’s Future Cities Initiative, who were to host us for the entire day.

Across the building ten STEM workshops had been set up. The girls were divided into groups and spent the day rotating around these workshops:

1. Siemens Train of the Future

This exhibit houses a life-size sample ‘train of the future‘ designed by Siemens and a number of information pods around a fake ‘station’. The girls were able to play a game provided by train marketers CBS Outdoor and answered questions on trains, answerable only by looking at the information pods and walking around the exhibit.

A large exhibition inhibits half of the Crystal building – showcasing aspects of STEM and how they are being used to plan for the future of our cities. In particular, the girls enjoyed exhibits on Fire Planning, Crowd control and High-Security ID checks. Older girls also had the opportunity to assume roles of Finance Minister, Security Minister, Transport Minister or Utilities Minister to manage a city – without making it bankrupt, running out of water or allowing to much crime to destroy it.

Emma & Charlotte from the FLUX Dance Theatre in Birmingham led a workshop exploring Newton’s Laws of Motion via dance. Girls were able to be an object with external forces and balance out their bodies, relying solely on the laws of Newton. All whilst enjoying an excellent view of London’s Docklands.

Dr Francesca Stokes led a workshop for the thirsty & inquisitive where girls were able to create their own drinks complete with perfectly formed mint or berry flavoured balls. This was definitely something to try at home as all ingredients were food grade and fully edible. For girls wishing to recreate the drinks at home, here’s a reminder of the ingredients we used:

Jacqui Thompson and her PulseCSI team led a session looking at fingerprints, strands of hair and the type of Science required to solve crimes. Girls were able to analyse all of the evidence and learn ways to use Forensic Science for themselves.

Ladies learning to code (in 10 weeks!) with Makers Academy ran a session on web coding and in 30 minutes introduced girls to the basics of the language of the web and allowed them to remix parts of the internet using Hackasauras Goggles. Girls were then able to create their own greeting cards and webpages using Mozilla Thimble.

Girls created their own apps in under 30 minutes with the AppShed platform – fan apps, music apps, Christmas wishlist apps and even commemorative 50th Anniversary apps for Doctor Who!

Technopop’s sponsors itis3D brought their 3D printers, 3D scanners and 3D samples along to show girls about the up & coming technology and it’s uses. Girls were able to design 3D objects for printing and a lucky few were able to take home what they designed.

There were a number of sofas, chairs and cushions in the comfortable lounge overlooking the Crystal building. A number of Big Stemettes were stationed in this area, armed with copious amounts of sweets to talk to girls about their jobs, career journeys and career advice. They girls were able to ask questions and learn more about our Big Stemettes. This is a similar format to what we do at our panel events – the next of which is on 7th December.

Run by the team from Excellence in Education, here girls got a couple of goodies and were able to learn more about seeing ‘Maths as a game’ and how knowledge of maths can help you understand (and maybe earn) some rather large numbers! What’s the biggest number you know?!

We closed the day with some words from our sponsors – The Crystal & Technopop and the presentation of British Science Association CREST Discovery awards to girls who have worked hard at our hacks in 2013. Thanks to our sponsors and to the Big Stemettes who came along, volunteered and run sessions – it wouldn’t have been a success without you!